In 698, the abbess Irmina of Oeren near Trier offers to the Archbishop Willibrord of Utrecht a part of the villa Epternacus with the small monastery and church she had built. These buildings were located on the hillock of the church of Saints Peter and Paul in the compound of a Roman fortification.

Willibrord built a new monastery where he introduced the Rule of St. Benedict. The remains of his church (21.20 x 7.60 meters) remain under the central nave of the present basilica. At his death in 739, Willibrord receives his burial in the sanctuary. His veneration requires the building of a new abbey in 800. From that time still remains the crypt which houses some remains of the eleventh century frescoes. 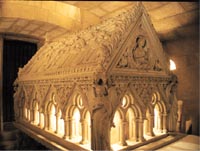 The relics of St. Willibrord are kept in a Merovingian stone sarcophagus set in a neo-Gothic building from 1906.

Following a fire, the Benedictine monks rebuild their church from 1016 to 1031. The Romanesque abbey presents majestic architecture characterized inside by alternating pillars and columns connected by arches and bunk arcs. This provision gives to the central nave a pronounced pace. The beamed ceiling, now reconstructed in the main vessel, was replaced in the thirteenth century by vaults on intersecting ribs.

The Baroque added several side chapels.

The abbey disappears in 1796. The buildings were sold as national property, the monastery church becomes a pottery. Restoration work permit re-establishement of worship in 1868. The renovation peaked in 1906 during the return of the body of the holy founder. Since then, the old abbey is the parish church of Echternach.

Military operations in 1944 are fatal to the sanctuary: the western part is destroyed. The reconstruction is done according to the Burgundian model, old views preserved, historical and archaeological data. Today the basilica has a simple and uncluttered appearance. Its main set is in the windows created by the French and Luxembourg artists Jean Barillet, Paul Bony, Theodore Hanssen, Jacques Chevalier, François Gillen, Emile and Joseph Probst, Gustave Zanter. In the aisles, they present the life of St. Willibrord. The high altar is due to Auguste Trémont. Two monumental baroque statues appearing St. Benedict and St. Willibrord given from the former abbey. In the left side chapel is a painting by Antoine Stevens 1604 representing St. Willibrord surrounded by pilgrims. Among them is recognized in the background dancers of the famous procession of Whit Tuesday. The event is likely rooted in pagan dances held in the Middle Ages despite the prohibitions of the Church. In the fourteenth century, these dances have taken therapeutic value according to the principle. “The similar is cured by similar” They were practised against epilepsy, chorea, ergot toxicity etc. Today the dancing procession gathers all year over ten thousand participants and tens of thousands of spectators.

Baroque abbey buildings are due to the French Benedictine architect Leopold Durand (1666-1749). They were raised from 1727 around a courtyard enclosed by cloisters. The western wing, called the prelates, was reserved for the abbot and lord of Echternach and its distinguished guests. On the pediment above the entrance are the weapons of the abbots Schouppe and Hartz and of the abbey, summoned by the mitre, the crosier and the sword. The building houses a school and a boarding school.

The architecture of the abbey profoundly influenced the facades of houses and farms in the region of Echternach. You meet such the corner pavilions, pediments, accented centrelines, the monumental stairs.

The Abbey Museum is housed in one of the part of the 18th century cellars. It has many testimonies of the history of Echternach: model of the Roman villa Schwarzacht, reconstruction of the tomb of Willibrord and an eighth century ambo, Cross justice Market Square. The main interest lies in the exposure of facsimiles of the scriptorium of the abbey which was particularly active in the eighth and eleventh centuries. Visitors discover the techniques of producing a manuscript and admire the most beautiful pages of the Gospel of Echternach, including those called Codex Aureus (golden codex): the Nuremberg Codex and the Codex of the Escorial, realized in 1045-1046 at the request of Emperor Henry III for the Speyer Cathedral.

As for the coverage of the Nuremberg Codex, it dates from the late tenth century and was donated to St. Willibrord by King Otto III and his mother Empress Théophanou. This remarkable work made of gold, ivory, enamel and precious stones symbolizes the Heavenly Jerusalem which is built on the Gospels.